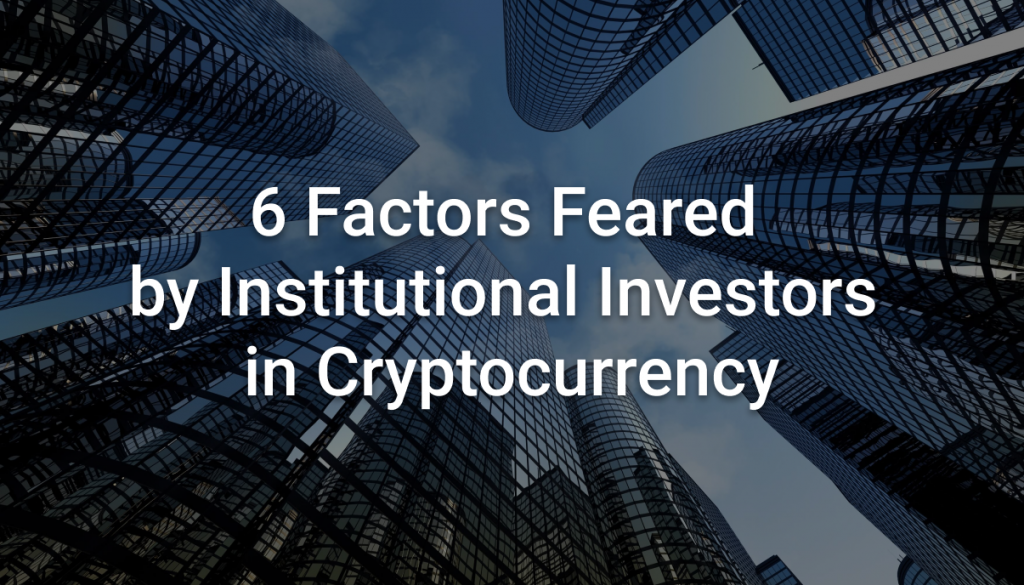 2019 has marked the entrance of institutional investors in cryptocurrency. Fidelity Digital Assets launched in May and several banks have announced plans to get involved in the space.

However, many institutions continue to wait on the sidelines. Why would they do this?

It’s hard to ignore the fact that Bitcoin has been the best-performing asset class in the world for the majority of its existence. So why the hesitation from the traditional investment community?

Here are six factors affecting the appetite of institutional investors in cryptocurrency.

Anyone following cryptocurrency markets have seen the headlines about the latest exchange hack. At some point in the future, there will certainly be a bigger hack than the one the industry just experienced. What this leads to is a confidence crisis, especially amongst the uninformed. ‘This must mean all digital assets are insecure,’ they might reason.

Cybersecurity is an issue that’s not unique to the crypto asset class by any means. But it does have an extra sense of importance in the space because people have a hard time trusting something they don’t understand.

While some companies have made progress toward a solution, figuring out a way to securely hold digital assets remains a primary concern among institutional investors in cryptocurrency.

In general, volatility has an inverse relationship with security. Volatile assets are seen as high-risk while stable ones are seen as low-risk. Newer, small-cap stocks tend to be volatile while government bonds tend to be more stable, for example.

While exceptions do exist, this is one of those tried-and-true principles of investing that many people can’t seem to get out of their heads. Just because an asset is volatile doesn’t make it higher risk than less volatile assets, although as a general rule volatility is a good way to assess risk.

Fiat currencies like the Turkish Lira, Argentinian Peso, and Venezuelan Bolivar were all stable for long periods of time before entering free fall. But most big investors would still rather risk losses in an asset class they know than take a stab at an asset class they don’t.

Digital assets as a class has only existed for little more than ten years. Many have yet to see its full potential realized.

It can be difficult to comprehend the total paradigm shift that has occurred with the invention of blockchain. The implications are vast, and often overwhelming for even seasoned traders.

This explains why a handful of the biggest traditional investors in the world are hesitant to go ‘all-in’ with cryptocurrency, for now. Some big names have been very vocal with their criticisms of Bitcoin, often relating it to some of the financial mechanics that started the 2008 financial crisis. These criticisms often demonstrate a fundamental ignorance about the technology upon which cryptocurrency is predicated – distributed ledger technology, or blockchain.

Immaturity of the Industry

Let’s face it. Trusting an asset class that’s only a decade old isn’t easy. The space has been plagued by bad actors and mishaps. And the industry as a whole has a branding problem, with negative misconceptions abounding.

These misconceptions might be the least tangible of the six factors but also the most difficult to overcome. The problem is purely cognitive in nature. As more traditional financial players continue to educate themselves with regard to blockchain, however, this should change.

Some traditional financial institutions have struggled to keep up with the fast-moving blockchain industry. With the smartest talent garnering an extremely high level of competition, the barrier to entry is enormous, to say the least. Some companies even attempt to circumvent the head hunting process by attempting to train their staff to learn crypto, which hasn’t proven successful for many companies.

Most people at financial institutions probably don’t know what the term “cold storage” means, for example, and much less how to implement it. This knowledge barrier creates an inconvenience for organizations which can be intimidating, leading to further segmentation of opinions about the industry.

The majority of the world’s most important international regulators have been more than vague in their guidance toward the crypto asset class. Some say cryptocurrency is an asset in the same way that property is, others say some coins are securities, while others claim digital assets are commodities.

This is a nightmare scenario for institutional investors in cryptocurrency. It’s even a headache for small retail investors.

To be fair, regulators have begun clarifying their stance toward crypto, as the industry continues to mature and increase in adoption globally. However, due to the fast evolving nature of the industry, this factor will continue to impede adoption by legacy financial investors.

What we have seen this year continues the movement towards mainstream adoption of cryptocurrency and blockchain. One day, market participants will look back on 2019 as the year it all began for institutional investors in cryptocurrency. The entrance of a few big players in the space will likely precede a gold rush to the gates.

XTRD’s commitment to bringing many of the traditional financial instruments to the world of crypto will prove instrumental in luring in many of the legacy investment institutions to this industry. XTRD’s creation of familiar products like a FIX protocol for crypto and a Single Point of Access for traders have already attracted many hawkish investors to the market. The XTRD model will bring higher liquidity, lower fees, and combine platforms, in an effort to increase returns for traders.

Factors like custody management, regulatory uncertainty, and cybersecurity are slowly becoming less and less of a concern. Through the new crypto instruments that XTRD is bringing to market, these apprehensions are becoming irrelevant. Given the pace of developments in the space, who can say how fast those obstacles might be overcome?